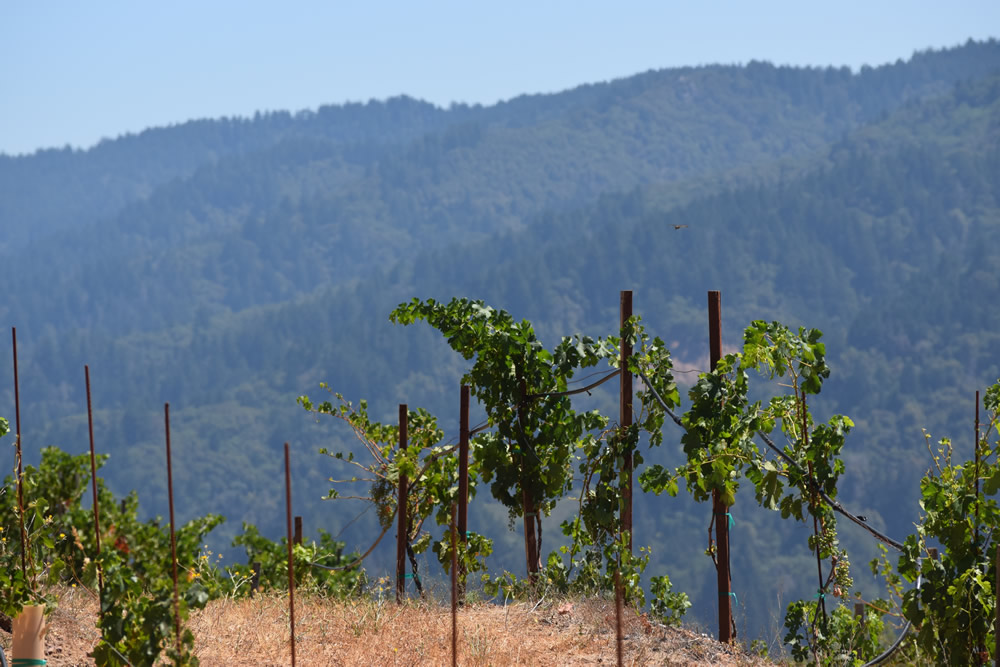 One minute you’re in Cupertino, a quintessential California suburb: front yards, driveways to two-door garages. The next minute you’re winding your way up Montebello Road, a two-way road as wide as one-and-a-half cars. The road won’t stop. Eventually there’s a driveway that winds through a thick grove of bay laurel and emerges at the top of the Montebello Ridge, 2,200 feet above sea level. You’re in the sky. On the right, Bud and Karen Fellom’s house is tucked into a nook. On the left, the vineyard. Rows of terraces to the top of the mountain. Dogs bark their greeting. Queensland Heelers: part dingo and smart enough to fetch a beer from the fridge. Bud is in the vineyard.

At the summit, there are 360° views. In the east, the basin you just drove from. To the west, a wooded canyon, Stevens Canyon. A creek and the San Andreas fault run through it, south to the base of Mt. Eden where Martin Ray made some of California’s first single varietal Cabernet Sauvignon. Beyond the canyon are the Santa Cruz Mountains mountains. There’s fog on the horizon with the ocean somewhere below.

Bud grew up coming to Fellom Ranch. His family used it as an escape from San Francisco. His grandfather, Roy Fellom I, bought the property from Paul Cena in 1929 family. Cena had planted Zinfandel. Occasionally, the Zinfandel came up in conversation, but the Felloms left the land alone until the late ‘70s when Bud fired up a 1946 International TD tractor and cut terraces into the side of the mountain. Bud planted Cabernet Sauvignon, Zinfandel, Merlot and Chardonnay.

I’ll invent my own history. Two decades ago Courtney went to work, as in he put his road bike in his trunk and drove to Stevens Canyon Road and took a ride up the mountain. At the top of the mountain, he was too focused on his poor cycling performance that he didn’t notice the vineyards. Then another time a couple years later, someone introduced him to Bud.

What’s more important is that Bud planted vineyards on this mountain top. Bud had not farmed before, but he didn’t hire a wine consultant. He tapped into some chemistry he’d learned as a pre-Med student at UC Berkeley and took oenology courses at UC Davis Extension. Mostly, Bud learned by doing. “We had to struggle,” Bud says about the early years. They found a balance.

The Felloms dry-farm, meaning they don’t irrigate. They don’t have to. There’s enough natural moisture from winter storms, rolling in off the Pacific and an almost daily marine layer. The marine layer cools the nights. The days are hot. The agricultural term for hot days and cool nights is diurnal shift. During the day the Cabernet ripens. At night, it stops ripening and retains acid, lengthening its growing season.

The soil is sandy loam and Franciscan chert. Sandy loam is composed of mostly sand with a little clay and silt. Being primarily sandy allows rain to sink deep into the mountain. Franciscan chert comes in hard silica ribbons, made from the shells of Radiolaria, a marine plankton. Millions of years ago Fellom Ranch and the rest of the Santa Cruz Mountains were at the bottom of the ocean. Radiolaria fell to the sea floor and kept falling until the Farallon Plate slid under under the North American and raised the Coast Range. Franciscan chert and sandy loam are infertile. Infertile soil makes the vines reach deep for water and nutrients. Bud estimates that his roots reach about 26 feet into the ground. It’s low yield viticulture. The berries are small. They have high concentrations of phenols, which are a variety of compounds including tannins, that give wine flavor and structure. High concentrations of phenols are perfect for making bold Cabernet Sauvignon.

The Felloms trim the shoots around the fruit. A trap wire lifts non-fruit bearing shoots. These techniques, known as canopy management, expose the fruit to more the sun and increase airflow. The sun ripens the fruit and airflow prevents mildew.

The air smells like bay leaves, oak, and yerba santa. It smells fresh. There’s a breeze. There are mountain lion and deer. Bud says the birds and coyotes snack on the grapes. Not enough to affect yield though.

In September, the fruit is handpicked. Someone from Martin Ray drives a truck stacked with grape bins down the mountain. The grapes are crushed the same day and put into a stainless steel open top tank to ferment. After the primary fermentation, the wine gets an extended maceration, and then left on the skins, seeds, and stems for extraction.

Following the maceration and gentle basket pressing the wine is aged in new French oak barrels for eighteen months. In the barrel, the wine undergoes a second fermentation called malolactic fermentation, converting tart malic acid into creamier lactic acid and carbon dioxide. The point of the aging is to build a balanced wine.

Oxygen seeps through the oak, breaking down the tannins, which makes the wine less astringent. Like the grape skins there are phenols naturally present in oak. The barrels impart tea, tobacco, and wood flavors to balance out the wine’s natural herbaceousness. Our principal winemaker Leslie Renaud says, “Santa Cruz has a lot of wild sage and we’re trying to make the oak play with it.”

Over The Rainbow: A Celebration of Pride

Having a deep respect for the beauty that comes from diversity, equality, and inclusivity, we…

A Walk with Geronimo

Uncork, connect and keep up….

Join us on this journey.